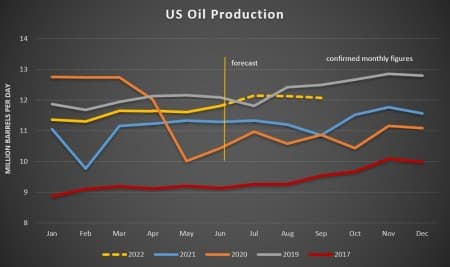 Despite the devastation caused by Hurricane Ian, oil markets have been relatively unaffected by this year’s hurricane season. The next real catalyst for oil prices, with the exception of a major geopolitical development in which Russia is involved over the weekend, will be the OPEC meeting next week, which is likely to push oil prices … Read more

As the European Union imposes a large-scale windfall tax, the region is pressing other parts of the world to do the same. The UK may already have taxed oil and gas companies to support rising consumer energy bills, but the EU is going one step further by planning an overhaul of the energy market. However, … Read more

The CEO of Saudi Aramco was clear in his recent speech when he outlined the main causes of the current energy crisis. He noted the lack of investment in oil and gas, the scarcity of alternative energy sources, and the complete lack of any plan B. Looking ahead, it seems unlikely that these problems will … Read more

Policymakers have to look beyond this winter and stop discrediting the oil and gas industry if they are to prevent the next energy crisis, according to the chief executive of the world’s largest oil company and largest exporter of crude oil, Saudi Aramco. Amin Nasser criticized the short-term emergency responses to the energy crisis in … Read more

1. Stike’s threat to rail highlights US energy weakness The possibility of a nationwide rail strike has pushed US natural gas futures above 9 per million British thermal units, amid fears of rail disruptions to coal, underlining the importance of gas in power generation. – According to the US Energy Information Administration, US natural gas … Read more

Politics, geopolitics and conflict After around 150 soldiers were killed this week in renewed fighting over Nagorno-Karabakh, Armenia and Azerbaijan agreed to a ceasefire. This “frozen” and often unfrozen conflict dates back to the 1980s, when the territory is considered to belong to Azerbaijan but is home to a large Armenian population, making the situation … Read more

by Tsvetana Paraskova – September 15, 2022, 7:58 AM CST In March, the US government allowed the release of 1 million barrels per day of strategic reserve oil over a six-month period. Earlier this week, there were rumors that the US administration might start refilling the Strategic Petroleum Reserve when oil prices fell below $80. … Read more

In the new age of energy shortages, one aspect of the situation has been overlooked: energy transfer. The demand for tankers has been increasing since the European Union imposed sanctions on Russia in the spring, and this trend will only increase in the coming months with the entry into force of an EU embargo on … Read more